Abi’s Flow Village was top of my list for an evening visit, but as weekdays were getting busier last week, I was very grateful for the opportunity to attend a Saturday workshop with him at Yotree – beautiful location, and with Barbara joining in, great company 😉

Workshop was titled “Yogi meets warrior” and all I knew was that Abi is teaching a Budokon Yoga, which combines martial arts elements and flowy movements to yoga sequences. The videos on his website and on social media are pretty illustrative, but don’t give you the full story.

Abi started with some facts on budokon yoga, its origins and the motivation of its creator – super insightful facts, check out some details here: http://budokon.com/. I was amazed at the “logic” behind this form of movement and surprised this is not bigger in Zurich! Apparently it’s got a lot of traction in Germany, so what’s up with that, Switzerland?!

In the first part of the workshop we practiced “budokon-style” sun salutations, which involved some choreography but were nicely split into easily digestible sequences. The movements have a distinct warrior reference, are to be conducted slowly and with awareness of the full range of motion of the limbs. Somehow reminded me a bit of tai chi…

The second part was dedicated to “animal locomotion” – yes, it is what you think it is: mimicking animal movements and thus engaging in a mainly core- and leg-workout. From warriors we turned into gorillas (both normal and creepy-walking ones :)), pumas, crocodiles, chimps and dancing dogs. I know, a pretty eclectic zoo!

But who would’ve thought being an animal is so difficult?! For once, evolution was standing in our way! We tried out lots of movements, (many of which stretched my coordination capabilities), before ending the 2-hour session with deep stretches and guided meditation.

Even as a pacifist, I’d love to try out more of the graceful warrior-style budokon yoga sequences! Needless to say, as an animal lover I did have a lot of fun doing the animal locomotion! Plus I learned something new about myself: I must’ve been a puma in another life 😛 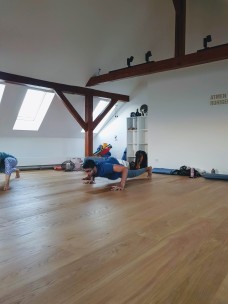 One thought on “Yoga, budokon and the animal kingdom”