On holiday it’s particularly hard to hold on to your home routine… unless you have super dedicated friends who nail you to it! That’s how we all ended up in yoga class on Saturday morning in Camden, London 😉

We went to MoreYoga, a big chain which happens to have their Camden studio just a minute away from our Airbnb. I did get so many fantastic studio recommendations from yoga teachers back in Zurich, but this was the only time efficient option.
Note to self: need to book an urban yoga retreat to London!

This place was pretty basic, I’d call it the Easyjet of yoga studios: meets the expectations and ticks all the boxes minus the atmosphere. It had a few changing rooms in the hallway, a self check-in iPad at the entrance and an out of order toilet in the back. So forget ginger tea and incense 🙂

The shortcomings of the location were however more than compensated by Sterre’s teaching. She led an open-level 60-minute vinyasa class that really catered to everyone. We started swiftly, after setting intentions for the class, and 20 minutes later we’d already done various warm-up poses and 4 rounds of sun salutations. Yes, it was fast paced for a while and it felt really refreshing.

Sterre was very precise and clear during the class: her flow was well conceived, with a lot of focus on warrior two and triangle variations, and she took the time to align throughout the session. In one hour we practiced a lot of different poses – if it had been someplace else, maybe in a more enjoyable location, I would’ve considered it a bit rushed. There and then: just right!

The class was a really good start to the day and the weekend, and it definitely made me want more: MoreYoga, more studios, and more time…
Maybe next time 😉 ♥ 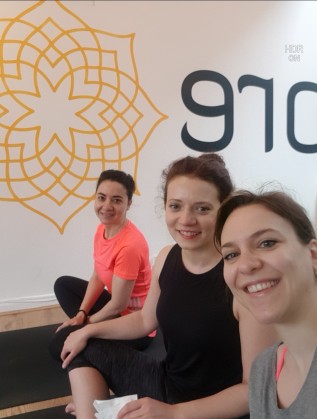