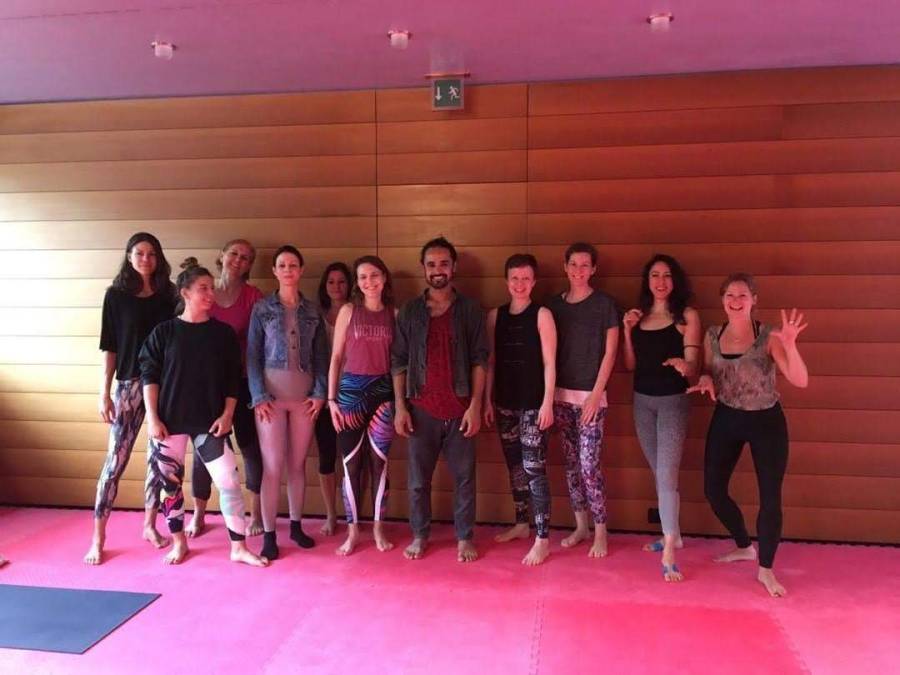 I love having guests over, especially when they come bearing gifts 🙂 I guess this is also how POP UP YOGA felt when fellow teacher Prashant Tewatia from Goa, India came over to Zurich to deliver a series of special workshops.

I had the pleasure of taking part in the Yoga & Qi Gong workshop on a Saturday morning, in the always lovely Hermans Wohnzimmer studio. The objective of the workshop was to combine these two related ancient movement practices, and to equip the participants with a few tools for daily use.

The studio was fully booked with ~15 participants, also including the lovely Soraya of Somo Yoga (I always like seeing teachers joining classes, to me it’s a great sign that yoga is constant education). Prashant started the class by introducing himself and the focus of the workshop. Most of us were not familiar to qi gong, so it was very good to understand how this compares to yoga. So while yoga focuses on strength, power, force in movement, qi gong practice aims to relax the whole body, to create very fluid, natural, seemingly effortless movements.

What also makes qi gong interesting is working with intentions and visualizations – they’re powerful, fun and mentally engaging tools, which are often used in yoga as well but probably not as intensively.

So since it was still early on a Saturday, we started with qi gong practice. Turns out, qi gong is very smooth and “flowy”, with many movements you would instinctively do in the morning to kickstart your body, but all practiced standing. We started with a simple “wake up” sequence, which mobilized the spine, and continued with the “universal breath” series, which obviously focused on mindful coordination of breath and movement, and activated the core in final strong HAH breath out.

After quite a few rounds of these sequences we could all tell it looks much easier than it is 🙂 We continued with a cleansing self-massage that spread the energy (qi) throughout the body, mainly in circular movements. I learned that in qi gong energy comes from the core/belly/center of the body. This is a popular theme these days, after the whole Darm mit Charme movement, higher interest in probiotic nutrition and more awareness of gut bacteria… but obviously something Chinese medicine advocated for millennia now.

To me, the best part of the self-massage was when we wiped off the fringe to clear off all negative thoughts and feelings, from fears, worries, bad memories, envy, pain. It was one of the most powerful metaphors and a great example of visualization in practice.

By the way, you can see the full practice in high speed below!

As mentioned before, all qi gong practice was done standing, but we also used the wall for a while as a prop and alignment guide. What I personally missed throughout all of these sequences was a mirror, to check if I’m winding my body in the right range of motion. I guess I just don’t know my body well enough to tell if I’m doing it all right 🙂

We entered yoga territory late into the workshop but that wasn’t an issue to me, as I couldn’t get enough of the knowledge on qi gong. Even in the short yoga practice we learned a lot about therapeutic poses for a straight back and for healthy feet. Prashant asked the group for any focus areas to touch upon and provided custom recommendations. Among other things, he demonstrated how to use a yoga strap to straighten our back (see some pics below).

I am so grateful for this enlightening workshop, in which I discovered so much about qi gong and yoga! Prashant mentioned the study of qi gong is a multi-year journey, as it is still a quite well preserved practice which has not been opened up to the Western world as yoga has in the past few decades. Dedicated qi gong students need to immerse into 3- to 12-month trainings in China, at a minimum. Lucky us, getting access to so many insights in just a few hours!

After class I connected with Prashant and checked out the stunning oasis where he teaches in Goa: https://www.ashiyana-yoga-goa.com/retreat-leader-bios-prashant-tewatia.html.

Hope we can meet again on the other side of the world, there’s so much more to learn, and live, and do… Namaste! ♥