It’s holiday time at home – like, home home in Romania – and usually that means chill time, lots of food, sleep, and very little exercise. Not the best combo, so I had to add some yoga to balance the mix 🙂

Thankfully, Cluj-Napoca (my parents’ city) boasts a few nice yoga places – of course, about 10% of what you’d find in Zurich but it’s slowly catching up. I had been to IKWE Yoga Studio more than a year ago and thought it was a lovely space. It was time to revisit and refresh my opinion, so booked two 60-minute sessions on Sunday evening (no better time for a bit of self care ;))

My first class was a vinyasa flow session with Alexandra, which turned out to be an almost private class: two yogis:one teacher. Great mix and beautifully refreshing class with a few no-frills well-executed sun salutations, warrior poses and variations thereof, and balancing challenges. Alexandra was great at adapting the class to our levels and needs, without going too easy on us despite the warm day.

In between classes I chatted her up on her training, and we exchanged opinions about our yoga paths. It was nice to learn about her teacher training in Cluj with an Indian travelling teacher (!), and to debate yoga style preferences. Speaking of Indian teachers, my second class was with one: Manish, probably the one and only yoga teacher of Indian origin in my country (I often don’t give my home country enough credit for diversity, so every foreign interest positively amazes me :))

If you were ever looking for two completely different yoga classes, it’s these two I took! Manish’s class was much more of a workshop than an usual yoga session. After a few sun salutations for mobilization, we practiced some classic poses such as warrior I, II, triangle, tree pose, but with extreme precision and alignment.

Manish did not demonstrate. Students demonstrated. He corrected – A LOT!
Once the ideal posture was reached, we held on to it for our dear lives… for one minute. 30 seconds into the minute, we were informed how we had broken the ideal posture and were set straight again. Yep, no time to get bored in that one minute 🙂

40 minutes into the class, Manish reminded us that the class was called “Stretch & Meditate” and explained his definition of meditation in this context: we would actively meditate on our muscles. Alright, that changes pretty much everything =)) I can forget about shavasana in 10 minutes!

We practiced even about 10 minutes after the official end of the class and I must say I really enjoyed the challenge and Manish’s perfectionism. I got a bit of tough love and a lot of hands-on alignment, and I’m probably a slightly better yogi for that. For a one-hour investment, a pretty sweet deal!

I learned Manish would also teach during the weekend at Untold festival, one of the most popular music events in Europe, and I was pleasantly surprised at yoga gaining traction in Cluj – well done yogis! 😉

Each new yoga experience is a gift, and the one I had at IKWE was a very generous one! Home sweet home indeed ♥ 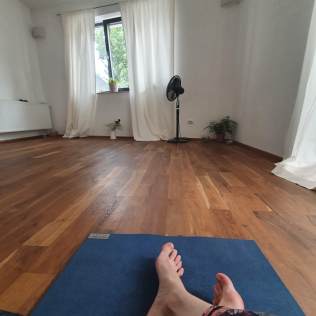